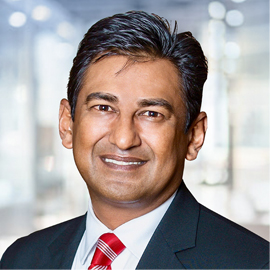 Vikash Salig is a Managing Director with an extensive leadership background in the Life Sciences and Healthcare industries. In addition to his many accomplishments in executive search and consulting, he has led transformational initiatives, both as an executive and an advisor. Vikash also has a global professional network, grounded in his specialized healthcare expertise in emerging markets as well as Europe and North America.

Vikash began his career as a family medical practitioner in South Africa in 1990, operating his practice for nine years. He prides himself on having earned both his medical degree and MBA, channeling the skills acquired from each to become a pharmaceutical and healthcare executive. Over an 18-year period, he held executive roles on nearly every continent.

Vikash acquired his MBA in Business Management from University of Cape Town in 2000 after completing his Doctor of Medicine at University of KwaZulu-Natal in 1990. He completed an additional course in advanced healthcare management at Manchester Business School in 1998. In 2015 he completed a Neuroscience based Executive Coaching course through Harvard Faculty.

A father of two sons, the youngest of which is on the Autism spectrum, Vikash played an active role in the fundraising and establishment of the Els Center of Excellence for Autism. As a public charter, the center was able to raise $25 million, to establish the Center, allowing students to attend free of charge. In addition, Vikash was inducted into the African American Golfers Hall of Fame in 2015.