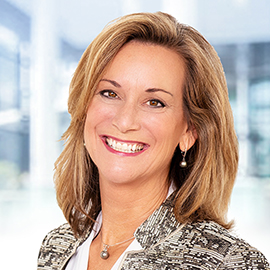 Robin Toft is the Chairman and Founder of Toft Group  Executive Search, where she combines a deep inside  knowledge of the life science industry with a passion for  building game-changing management teams. In over a  decade in the executive search industry, Robin has  placed members of boards of directors, CEOs, COOs,  CFOs, CCOs, CMOs, CTOs, and other senior  management positions in North American companies in  biotechnology, pharmaceuticals, diagnostics, medical  devices, life science tools, and digital health. A champion  of diverse executive teams, Robin has built a reputation  for recruiting women and minorities into top roles and  helping the life science industry overcome unconscious  bias in hiring. Robin is the author of the book “WE CAN,  the Executive Woman’s Guide to Career Advancement”  (available through www.RobinToft.com) and leads Toft  Group’s WE CAN™ movement to expand networking and  learning opportunities for female executives nationwide.

Robin currently serves on the board of T2 Biosystems, The Clearity Foundation, supporting ovarian cancer patients, and is the Chairman of LEAD San Diego, the only  organization in greater San Diego dedicated to  developing civically engaged leaders. Additionally, Robin  has been active on American Heart Association’s “Go  Red for Women” executive leadership team and has  participated in the annual 60-mile Susan G. Komen 3-day walk to support breast cancer research since 2010.

In the American Business Awards for 2020, Robin won Gold in the three major individual categories of Lifetime Achievement, Maverick of the Year, and Woman of the Year. Robin also won silver for Entrepreneur of the Year – Business and Professional Services. In 2018 and again 2019, she was honored as a finalist in Ernst & Young’s prestigious Entrepreneur of the Year awards. In 2017, she was named Woman of the Year by the San Diego Business Journal and also as a finalist for their “Most Admired CEO” awards. Under Robin’s leadership, Toft Group received Athena’s prestigious Pinnacle Top Company Award in 2013.

In 2006, Robin launched a second career in executive search  following more than two decades as a biotech executive. Her prior  roles include senior Vice President of Global Commercial  Operations at Roche, Vice President of Virology at Roche, and  Executive Vice President of Marketing and Sales at ViroLogic Inc.  (now Monogram Biosciences), a San Francisco startup where she  was instrumental in the company’s first product launches and IPO.  Robin also served in a variety of senior management posts at  LabCorp, one of the world’s largest clinical diagnostic companies,  after beginning her career at SmithKline Beecham Clinical  Laboratories.