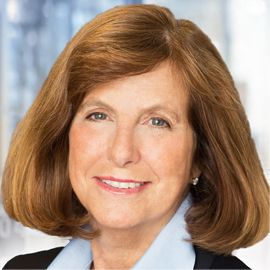 Debbie Horowitz is a veteran executive with more than three decades of experience across the private and public sectors. As Sucherman’s general counsel and CAO, she manages legal strategy, general operations and human resources for the firm’s New York, Los Angeles and London offices, ensuring the state-of-the-art support functions, technology and superior talent to deliver flawless execution for clients.

Debbie is a trusted counselor for the firm’s leaders — an essential advisor to the essential advisors — on everything from strategy and operations to talent management and staffing to fostering the company’s culture and sustaining its values.

Debbie joined Sucherman after more than a decade at Viacom, most recently as vice president and associate general counsel, administration, technology & interactive media. She oversaw legal department administration and legal services supporting the firm’s global satellite, technology and information systems and new media, at a time of explosive growth and extraordinary complexity in those areas for the media giant. Previously, she collaborated on critical finance and corporate governance functions at the company.

Debbie earned her Juris Doctor at New York University School of Law; a Masters of Public Administration at the University of Cincinnati; and a Bachelor of Arts at Skidmore College.