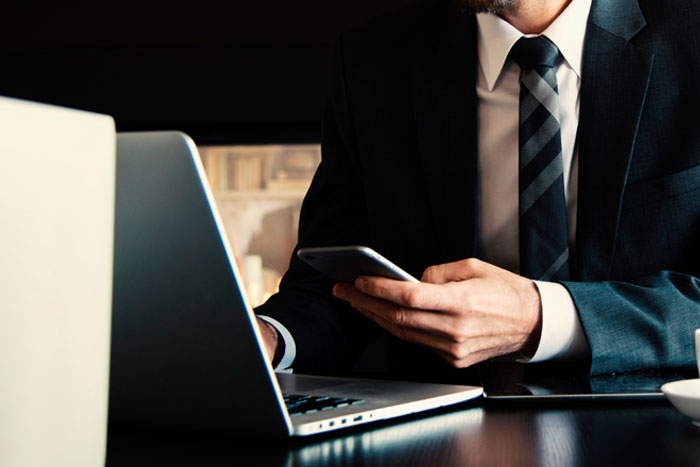 WHY YOU CAN’T LAND TOP TALENT–IS IT A FLAWED PARADIGM?

The market for hiring key talent in the equipment leasing and commercial finance space is shifting, and the paradigm for recruiting has changed with it. A paradigm is defined as a theory or set of assumptions about how to think and operate in a given field. With so many firms competing for the best talent, using a flawed paradigm in hiring is costing companies time, money, and opportunity.

So, What is Going Wrong?

A working hypothesis is that hiring markets exist in three distinct and changing stages: Company/Client-Driven Markets, Neutral Markets, and Candidate-Driven Markets. Over the past few years, the industry has experienced each of these three phases, but to succeed in today’s market, we need to understand precisely where we are now.

From 2008 to 2011, the market was a Company/Client-Driven Market. Supply exceeded demand for the industry. Companies that were stable, growing, and hiring could attract good people with minimal effort and nominal compensation change. A Client-Driven Market is the rarest of markets, but we experienced one on the heels of the global financial meltdown.

However, in 2011, things started to change. Capital became bountiful for independents, and banks wanted to grow. Team lift-outs were a regular news item, and the hiring market transformed to what we call a Neutral Market. This meant that there was an equilibrium between companies hiring and candidates looking, and the market was fairly balanced and efficient on both sides. Good performers would change jobs and were rewarded with traditional pay increases of 10%-15%. There seemed to be a good supply of candidates who were ready for a new challenge. 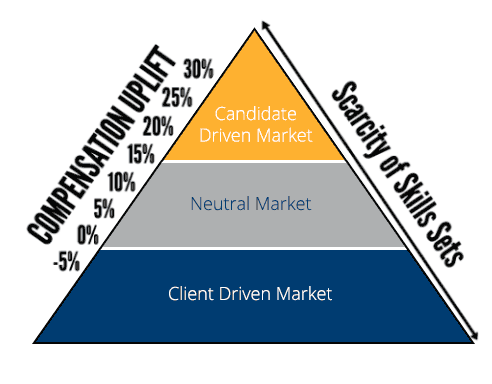 In 2013, another shift occurred in the hiring market and the change has continued through this year. The markets have shifted to a CandidateDriven Market. Demand for key leaders and managers in important roles exceeds the talent willing to change jobs. Recruiting tactics that worked in previous years now fall short of success. Offers with nominal 10%-15% pay increases are now routinely rejected. Even if candidates accept offers at these levels, their resignations are trumped by counteroffers of 20%-25% pay increases, coupled with promises of a brighter future.

As the above chart illustrates, these three market conditions will drive compensation thresholds. But there is more than just market conditions to factor into the equation. Filling certain key functional roles requires additional premiums. For example, over the past two years, strong sales leaders, business unit heads, and general managers could move to a new employer, bringing with them above-average track records and access to people, accounts, and volume. Such candidates have been in very high demand. Likewise, many companies are seeking top credit and risk talent. There is often a shortage of people that can deliver what is needed for these executive roles. The more rare and difficult the skill set, the higher the cost premium has become to recruit a suitable employee.

Beyond Compensation – What Else Matters?

But it’s not just about money. So what else is there? It’s the internal recruiting process itself. Many firms, stuck in the company-driven market mindset, do not craft an effective interviewing and closing strategy. They do not spend enough time in the interviewing process trying to sell potential employees on their company. They assume their institutions sell themselves and so spend 90% of their time screening, vetting, and interviewing candidates and a mere 10% discussing the company and its culture. The time it takes to convince and connect with top candidates rises in proportion to their skills. This is especially true in candidate-driven markets. The most talented candidates do not need to change jobs, but if they do, they certainly want to feel valued and sought after by the new company. Two leadership searches conducted by ZRG Partners in the past year illustrate the stark difference in effectiveness between these two approaches.

The first project was to fill the position of a Chief Credit Officer for a bank lender. Initial interviews with the shortlisted candidates were mechanical and impersonal. Viable candidates met with three or four leaders in the bank, many of whom were ill-prepared for the meeting and knew very little about the candidates’ backgrounds or motivations. The candidates’ impressions of the bank were poor. The bank made a minimal effort to sell itself and failed to build a strong rapport. Three months passed between the first interview and the final offer. And when it arrived, the offer the bank presented amounted to a lateral pay scenario, which the candidates declined. What were the paradigm misses? First off, the process the bank used to benchmark compensation was flawed and severely misjudged the range of compensation needed. In the interviewing process, the bank also neglected to properly sell itself to the candidate, and key management team members fell short of making any sort of personal connection. Lastly, the process proceeded slowly, creating a poor pace and rhythm to close out the deal efficiently and dampening candidate enthusiasm.

The second example demonstrates a much different process with superior results. This project was to recruit a Head of Sales for a large independent lender. After efficient initial screening and vetting, first-round interviews were conducted with six candidates, two of whom were quickly identified as finalists and slotted for second-round meetings within a week. And then, while the excitement was still in the air, management pulled out the red carpet: the final candidates met with key senior leaders and board members. Interviews included visits to multiple venues, such as office meetings with local management, but also a dinner out where the parties could see each other in a social setting and forge personal connections. After five separate interview meetings with board members, C-Suite executives, and peers, all completed within three weeks, the company crafted an offer that provided a 25% uplift from current fixed compensation and a roadmap review to significant increases over the coming years. The bank extended the offer on a Friday, and over the weekend, while the candidate reviewed it, several key leaders reached out to convey their excitement about the potential acceptance and future alliance together.

Key to Changing the Paradigm – Alignment

So, what are the key areas for alignment that will bring your processes and approach in lockstep with the current market conditions?

There are four areas to consider.

Your View – Are You Seeing Clearly Enough to Succeed?

Are you operating with a flawed paradigm that does not fit the market, or have your hiring practices evolved to match today’s market conditions? Are you viewing the market through rose-colored lenses or is your vision 20/20 when it comes to hiring key talent? You can land top candidates if you pay attention to the market and engineer a process that is detailed, focused, and expedient — a process that aligns your entire team with the current market conditions.