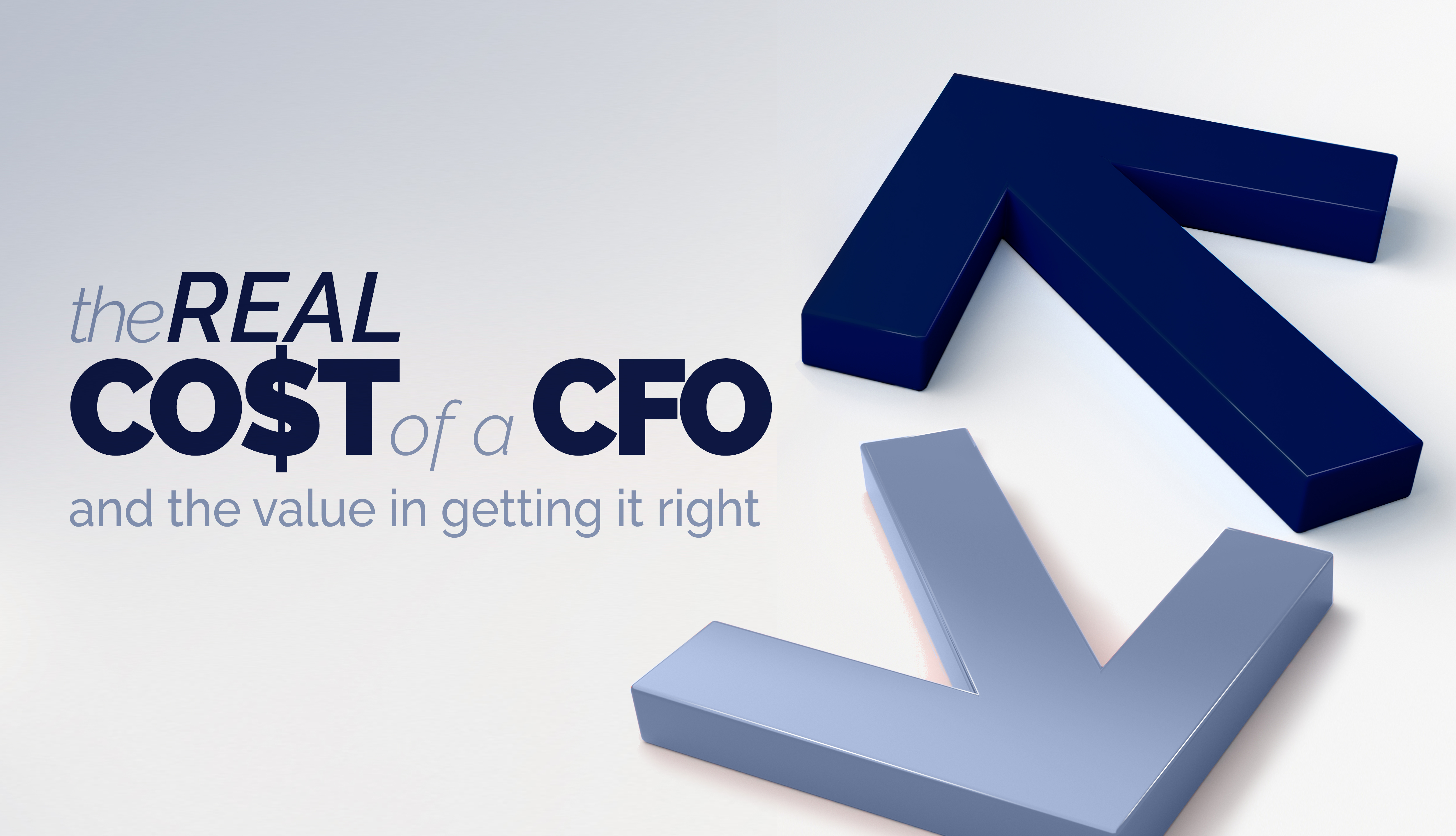 “The Uber of…” has become a trope in discussing technology and disruption in the marketplace. Earning that title is aspirational: being referred to as “the Uber of…” implies that your product or service is set to redefine its sector the same way Uber redefined car sharing and taxis. Uber, however, provides a cautionary tale as well as an aspirational one. Prior to their IPO, the company languished for three years without a Chief Financial Officer. The company lost billions during the CFO vacancy and the possibility of its IPO was imperiled. Eventually, Uber did list on the NYSE and continued to struggle with share price and market value.

What this one high-profile example can teach us is that the role of CFO is unavoidably a crucial one, especially in the early stages of a company’s development. Putting the right person in the CFO chair is both a productive and a defensive need. It is productive of value and defensive against both loss and lost opportunity.

Two companies who had CFO shifts in 2020 exemplify the pressures of the COVID-19 pandemic on the market. Both institutional foodservice giant Aramark and pharma star Moderna changed CFOs. Thomas Ondorf took the seat at Aramark effective January 7, and Davide Meline became Moderna’s CFO in June of 2020. A global health crisis unparalleled for the last century is obviously not something a single person can affect even within the limited scope of a single company. How these two CFOs handled their challenges sheds light on the importance of having the right person in the CFO seat.

By March of 2020, barely three months into Ondorf’s time at Aramark, many college campuses and sports arenas were shuttered, and few could guess when they might reopen. With a good amount of business tied to the operation of schools and large venues, it is no surprise that Aramark took a heavy hit through the early part of the pandemic. Their stock price dropped from $43.57 on Ondorf’s first day to $12.94 on its lowest day of March 18, 2020. By six months into his time as CFO, however, Ondorf saw Aramark rebound to $32.25 per share, limiting a potential decline of over 70% to only about 26%. While it is impractical to assign the entire savings to the CFO alone, that role would be critical in projecting losses and seeking opportunities to stanch the bleeding.

Aramark pivoted to providing personal protective equipment (PPE) through its Uniform and Career Apparel division and to-go meal services through various kitchens where they were able to keep cooks employed. Without indulging in undue speculation, it appears reasonably clear that having a capable CFO in the seat helped Aramark weather the worst of the pandemic and begin to right the ship. Since the low point of March 2020, their stock value has recovered by over 149%.

On the other end of the spectrum, we find Moderna, whose success in developing a COVID vaccine undoubtedly underpinned their remarkable 2020. While Aramark weathered a decline in gross revenues a bit above 34%, Moderna saw gross revenue growth of over 5,000%. The increase in share price and market capitalization since Meline took the financial reins in June of 2020 are only slightly less eye-popping at nearly 190% and nearly 200%, respectively.

Just as it is unfair to pin Aramark’s losses solely on the CFO, so too it is unfair to praise Moderna’s incredible growth as the work of the CFO. What we can see, however, is that Moderna is not letting this rapid growth lead them to over-leveraging their assets. Their debt-to-EBITDA ratio as of May 2021 stands at 0.4, indicating that while they are flush with cash, they are paying their bills. The leadership of a steady CFO can keep a company from overheating in the rush of growth. As Rich Herman, Managing Partner in ZRG's Financial Officers practice puts it, "In the recent global crisis, CFO’s helped lead stabilizing efforts. Appropriate cash management and creating transparency have helped companies plan and respond to the unknown." Recall Uber’s rudderless years with a CFO vacancy and the effect that had on their eventual IPO. Moderna is at no such risk currently.

The ability to temper gains can be as crucial as the ability to weather losses. It is unsurprising that both Ondorf and Meline came to their companies from the CFO role and were not first-timers through this challenging moment. “In times of volatility, as we have experienced numerous times over the last 20 years, the CFO has a platform to do the things that are required to save the organization from going under,” offers Christopher Langhoff, Managing Director in ZRG’s Financial Officers practice. “They have to make the tough calls and use the data and scenario planning to make sure that the company can weather the storm. Volatility requires data and planning, and the CFO and his or her team are best positioned to lead that work.” Both Aramark and Moderna were well-positioned to encounter the unknown effects of the pandemic. While they certainly seemed to be headed in different directions as of March 2020, experienced leadership has helped both plot a steady course. 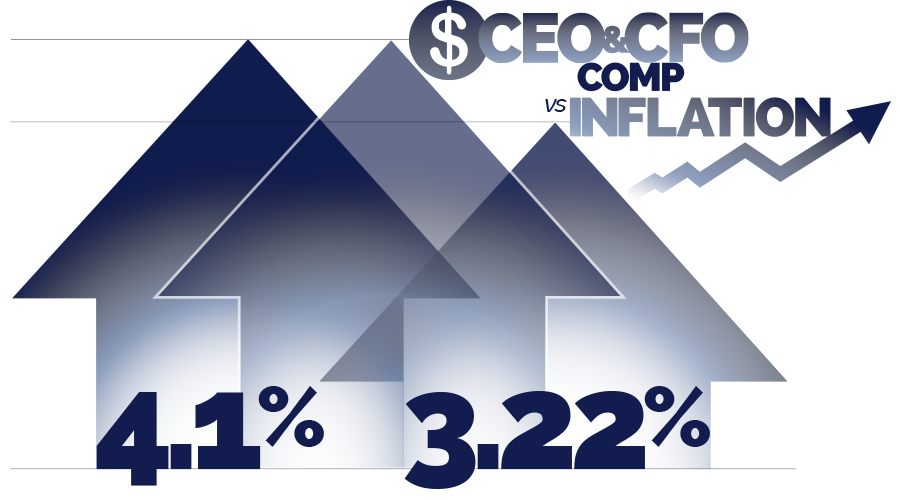 Compared with an index of all named executive officers, CFO direct compensation did not deviate significantly from the median of all non-CEO peers in the C-suite. Total NEO compensation through the study period rose at a faster rate than isolated CFO compensation.

Looking at a sector-by-sector breakdown of the data provided, Communication Services and Industrials saw an average decrease year-over-year, though both remained within one percent of the overall median in terms of CAGR over the study period. Consumer Staples and Real Estate saw substantially larger year-over-year increases than average, though again both were within one percentage point of the overall CAGR, indicating more of an equalizing trend than one of growth or decline between sectors.

Gallagher’s study was limited to publicly traded companies because those companies are bound by disclosure rules requiring compensation data be made publicly available. Privately held companies are not under the same constraint, which prevents a one-to-one comparison across ownership types, although Herman reminds us "We’re facing unprecedented demand for qualified finance professionals. Public and Private Company CFO’s, and their direct reports, are seeing an immediate surge in compensation as a result."

Unicorn companies—that is, privately-held companies with a valuation over $1,000,000,000—are an intriguing component of the private company landscape. The term was coined in 2013 by journalist Aileen Lee. At that time, there were fewer than 50 such companies world-wide. There are presently over 700 such firms globally. A general demographic sketch of a unicorn CFO would indicate that such a person is likely to be male, definitely college-educated, from a finance or investment background, have at least 19 years of professional experience prior to their position as CFO at the unicorn, and unlikely to want to move from a successful IPO of one unicorn to the building phase of another. Given the results of a McKinsey study on company value and diversity, the gender imbalance at the CFO role of unicorn companies may indeed be something those companies might seek to address.

“The opportunity to get on a growth train, bring best practices to a new company with momentum and needs, and the rewards that can come from hyper-growth has and will continue to be an appealing option for experienced CFOs to take a risk and hope to achieve a great reward, both personally and financially,” says Langhoff.

While this data is useful in assessing one sense of the cost of a CFO—namely the numeric cost—it does not tell us much about the intangible cost of a CFO. What happens, in other words, when you have the right person in the seat? When the right CFO is in the seat, what measurable effect is there on overall company value?

What we can see from all of the above is that having the right person in the CFO seat is crucial to a company’s financial health and success. Prior C-suite experience is desirable but should not prevent a talented executive from making the jump, for example, from a Senior VP position to CFO. Of the 51 CFO changes tracked by CFO Magazine in 2020, 20 were either a promotion within the company or career advancement. A few of the internal promotions were a move from a functional or subsidiary CFO role to a company-wide CFO. Those moves overall were evenly split between internal promotions and external hires, indicating that the best fit may not necessarily be someone who is already with the company. The modern CFO tends to be the number two executive after the CEO and can occasionally step into the CEO role on an interim basis, as happened in 2020 at both Tapestry and Ted Baker where their CFOs took on the interim CEO role and then stepped back into finance after a permanent CEO came on board.