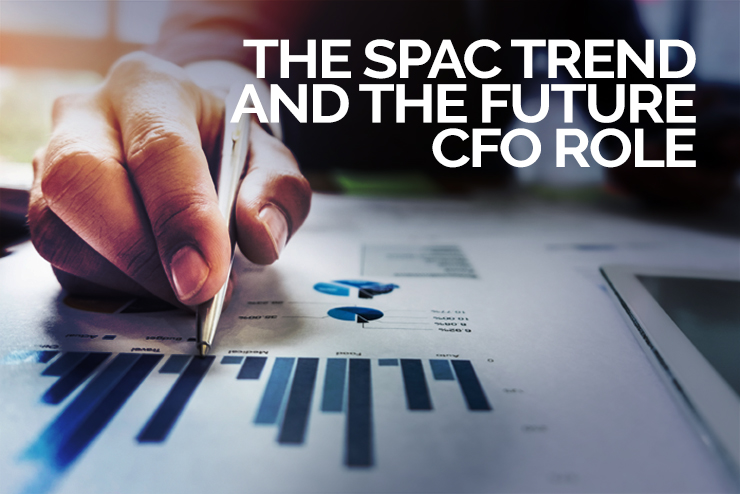 Special Purpose Acquisition Companies (SPACs) — so-called “blank check companies”—are increasingly supplanting traditional IPOs as the preferred means of entering public trading. By the close of 2020, there were 279 active SPACs with a market value of over $88 billion. At the start of February 2021, there are a total of 362 active SPACs with a combined value of over $111 billion. The structure of a SPAC presents interesting opportunities for astute human capital professionals. The CFO role may be of particular interest, as is the role played by PE backing in the current SPAC boom.

CNBC’s Bob Pisani notes succinctly that “SPACs are companies with no commercial operations that are established solely to raise capital from investors for the purpose of acquiring one or more operating businesses.” The most common current use of a SPAC in the marketplace is to take a company public, generally in a reverse merger scenario: the SPAC as a publicly-traded entity completes a merger with a private entity that then becomes a public entity. The company that gathers the capital to form the SPAC is known as the sponsor, and the company to be taken public is the target.

Counter to a traditional IPO, a SPAC forms a sort of interstitial company between its sponsor firm and the future public firm. While the SPAC has no business to conduct other than the acquisition of a target company, it is still important that it be governed appropriately. The SPAC will, in this case, have its own board. That board is generally comprised of board members of the sponsoring firm; however, the opportunity may remain to bring in a new CFO to manage the SPAC itself. 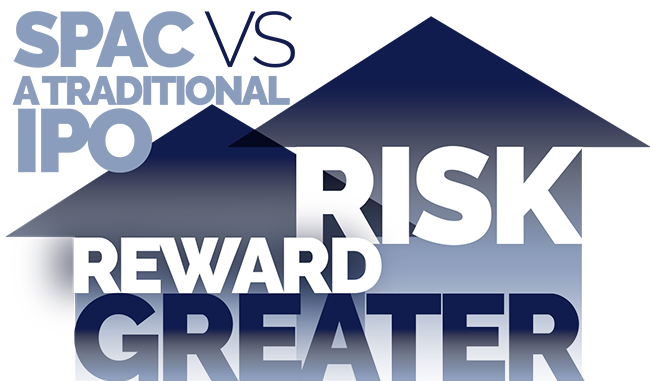 Sponsors raise funds to acquire targets by selling shares in the SPAC. These shares are usually priced at $10 each and carry a warrant—either full or partial—for stock in the future merged company. Crucially, all SPAC funds are held in escrow for the entire search and acquisition period. If the SPAC fails to acquire its target within the specified time-frame—usually two years—all funds are returned to the investors from escrow, and the sponsors receive nothing for their efforts.

Some SPACs will be attractive to investors because of the space in which they are seeking an acquisition. Investors who wish to fund sustainable industry can find SPACs to buy into that are built to acquire companies in that space. Other SPACs attract investors by the star power of their boards and backers. Chamath Palihapitiya, an ex-Facebook executive, is one such figure. Through his Social Capital Hedosophia Holdings companies, Palihapitiya has brought three companies public: Virgin Galactic, Opendoor, and Clover Health all completed their mergers with Social Capital Hedosophia I, II, and III respectively. Social Capital Hedosophia V has announced plans to merge with fintech company SoFi.

The surge of SPACs in 2020 was not without controversy. Some familiar names in the finance world urged caution. Lloyd Blankfein spoke recently with CNBC, arguing that the shell structure of a SPAC exposes investors to greater risk than a traditional IPO, since the ultimate move to go public is a merger and not an IPO. The rush to use this mechanism, he feels, bears too many hallmarks of a market bubble.

Contrary to Blankfein’s skepticism, researchers at Deloitte believe that SPACs have a market advantage over IPOs. “Mitigating the pricing risk of traditional IPOs—especially at a time when the COVID-19 pandemic and the [2020] presidential election have combined to fuel volatility—is part of what’s driving seasoned investors and management teams to flock to SPACs in droves.”

Mark Yusko of Morgan Creek agrees with Deloitte that SPACs are not inherently riskier than a regular IPO, although it bears noting that he is running a SPAC=based ETF. “Though investors will have to be “very careful” not to get involved in lower-quality investments as the space grows, the idea that SPACs are dangerous on the whole “is simply not true,” he said.

On the whole, it is hard not to hear an echo of the dot-com bubble of nearly 20 years ago or the mortgage-backed securities crisis that followed a few years after it. Whether the process of bringing a company public through a SPAC as opposed to a traditional IPO results in an overheated marketplace is ultimately a question that cannot be answered here. It can and should, however, be on the minds of finance executives and private equity backers.

Whether a bubble or a boom, SPACs provided a rush of capital in 2020, much of it from PE backers. “The flood of SPAC deals in 2020 has also drained the funds from institutional investors that have powered the model forward. These and other forces are shaping up to make 2021 a make-or-break year for blank-check companies,” notes Pitchbook. In attempting to make themselves more attractive for target companies, many SPACs are reducing their “promote”: the stake the SPAC investors will take in the new public company.

While a dilute promote can make the SPAC more attractive to the target company, it has the opposite effect on the SPAC shareholders.

"Higher-quality SPAC sponsors could also lead to better returns for their investors. Those SPACs led by large asset managers and former CEOs have outperformed others, according to an analysis by Stanford University professor Michael Klausner and NYU's Michael Ohlrogge.

The credibility of SPAC sponsors becomes increasingly important as scrutiny around their performance grows. Klausner and Ohlrogge found that SPACs on average lost more than a third of their value one year after merging and that the performance was highly correlated to the amount of dilution in the deal."

It may be reasonable to expect some contraction in this space, even if that contraction does not reach the level of a bubble-burst.

Whatever else a SPAC does in the marketplace, it opens new opportunities in the CFO role. There are several trends worth noting here. As noted above, there are multiple combinations of companies that will eventually go public through this route. Some will be PE-backed firms, while others will be driven by serial investors in the SPAC space like Palihapitiya’s Social Capital Hedosophia ventures.

In the case of a serial backer, several main trends emerge. In the first, the shell company repeatedly employs the same individual as CFO. Using Social Capital Hedosophia as an example, we see Stephen Trieu has served in this role six times so far. This would seem to indicate confidence in his abilities in that role. As three of those six SPACs are now publicly traded companies, that confidence appears merited.

"CFO hiring for a SPAC creates an interesting set of talent challenges. A number of the current SPACs have roots in Private Capital, be it Private Equity, Hedge Fund, or Venture Capital. A CFO needs to understand a blend of both the Private Capital and Public markets to be effective," states Rich Herman, Managing Partner and Global Private Equity Practice Leader at ZRG. "Public-proven CFOs are a highly valued talent commodity right now. Finding one with the right blend of tactical hands-on ability and high-level strategic credibility is a growing challenge. Pairing a first-time CFO with a Public Company-experienced Controller with strong Technical Accounting skills and an expert in Investor Relations can help with the sprint to the public. We’re seeing the increasing deployment of Interim and Consulting resources as the SPAC market continues to churn."

Another way the CFO role is filled through a SPAC appears to be that the target company CFO is tasked with taking on this position, generally then holding that same spot in the new public company. Such is the case with Loren Eggleton of Appharvest (NASDAQ: APPH), an ag-tech firm that went public via SPAC. Eggleton joined in Appharvest 2019, with the formal de-SPAC occurring in 2021. During that time, the company’s stock has risen approximately 214%. Appharvest is currently valued at a $3.53 billion market cap. Eggleton came with a finance background, most immediately serving as VP of Finance for Famous Brands, which owns the brands Mrs. Fields and TCBY, and is owned by Z Capital Partners.

Involving the target company CFO in the SPAC may more often be an interim assignment. Many SPACs incorporate and begin to sell shares on the strength of the backing executive team, as in the Social Capital Hedosophia case. Without a target immediately in mind, there would be no way to involve that CFO in the SPAC. There may be room in the SPAC world for interim CFO positions, taking the reporting and diligence burden away from either the backing CFO or the target CFO. This kind of placeholder position, however, appears to be rare. CFO transitions in a SPAC appear more likely to be the backing CFO stepping aside for the target CFO before the deal is completed. Again, this can only happen further into the lifecycle of the SPAC: the target is identified and has at a minimum signed a letter of intent, if not a definitive business agreement.

According to Bruce Robertson, Global Financial Officers Practice Leader at ZRG, "A successful SPAC CFO is someone with extensive finance, accounting, and most especially merger and acquisition experience. It's key for them to come to the role with prior experience from a publicly-traded company." This, of course, is only sensible given that the purpose of the SPAC itself is the acquisition of another company. While SPACs are unmistakably a hot topic, there are still relatively few of them compared to all other publicly traded companies, making it difficult to discern statistically meaningful trends in any specific role.

What the Market Tells Us About Their DNA

Given the rarity of SPAC-specific CFO roles and the compliance and reporting requirements of the company structure, it would be tempting to see them as more like an external hire than an internal promotion; that is, that this would be a rare opening for a highly qualified and motivated candidate. Within the SPACs studied, however, the reality seems to be that this role is more like the promotion of an internal candidate, which is the far more common route to the role. By way of comparison, CFOs within Fortune 100 companies are internally promoted at a rate of 69%. Most of those internal hires (70%) are at least 11-year veterans of their own firms. SPACs are, of course, unlikely to be Fortune 100 companies on their own, so the 31% of external hires are likely to be higher there. A brief and non-scientific review of SPAC CFOs indicates that there is at minimum a plurality of people in the role with prior experience at that level.

Although the formation of a SPAC may not necessarily mean the creation of a new position, it is still worth examining the possibility of adding diversity to the board in this post. It appears that SPACS at present lag behind the Fortune 500 in this regard. As of early February 2021, the 148 SPACs trading on the NYSE and NASDAQ had female representation in the CFO role at a rate of approximately 10.8% (16 of 148). By the end of 2016, the most recent data presented, 12.6% of Fortune 500 companies had a female CFO, and that trend-line was pointed upwards. Without robust survey data, it is difficult to discern the rate of ethnic diversity among SPAC CFOs, although some studies do note that having a female CFO can result in a substantially higher residual return rate. 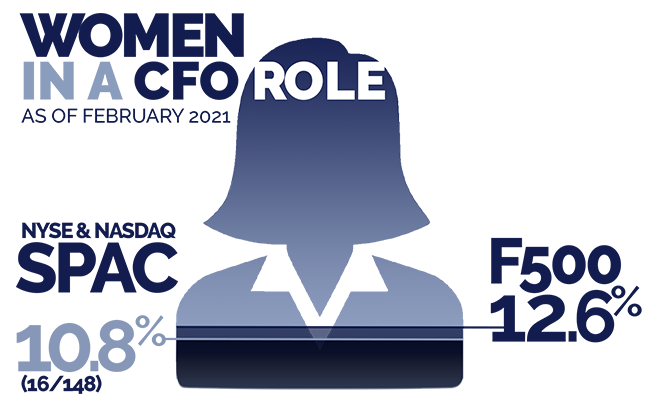 Bearing these statistics in mind, it is critically important—in the event of staffing a SPAC CFO role—to present clients with a diverse slate of candidates. While the traditional CFO pipeline appears to be trending toward diversity, this specific corner of the market shows room for improvement.