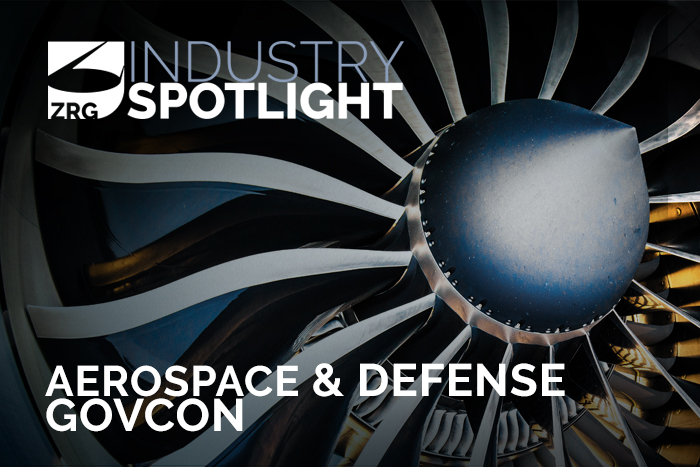 We are writing today to share ZRG's first Aerospace & Defense/Government Contractor Industry Snapshot — a summary of key industry hiring trends, executive moves, and financial performance. This will be a quarterly publication designed to provide you with data-driven insight into critical talent developments and their industry context. 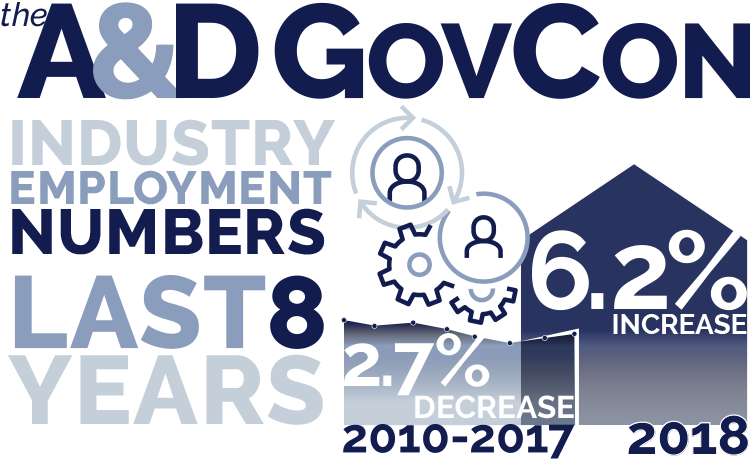 Fiscal 2018 marked a turning point for the industry. After eight successive years of workforce contraction that saw over 217,000 jobs lost, this past year saw a robust gain of nearly 59,000 positions. This bounce represented a 6.2% year-over-year increase and likely reflected growing senior executive confidence following two years of sustained revenue growth industry-wide (see below). 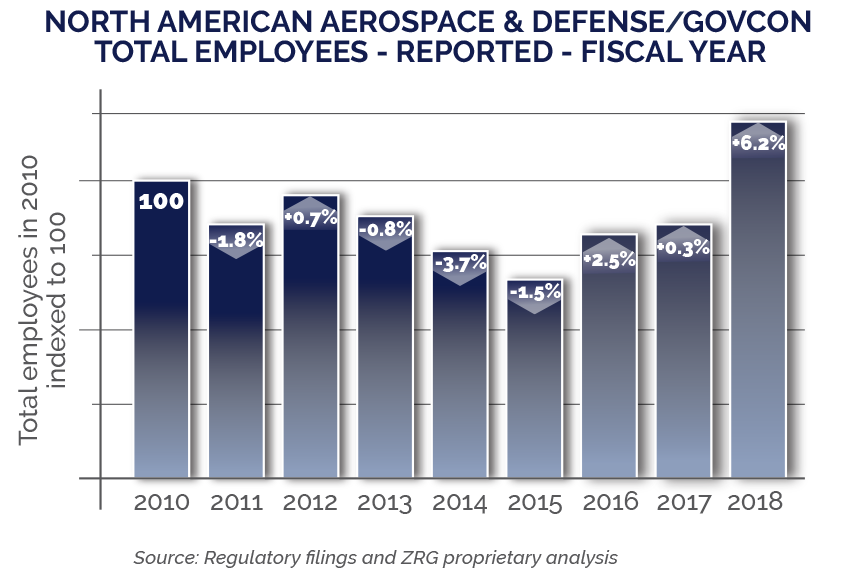 EXECUTIVES ON THE MOVE

In this section, we highlight some of the notable executive leadership changes within the Aerospace and Defense/GovCon industry over the past few months. Please note that the list below does not represent retained search work performed by ZRG, but simply reports on senior leadership changes that have taken place recently.

Science Applications International Corporation announced that Tony Monaco will retire as chief executive officer effective July 31, 2019, and that its Board of Directors has elected Nazzic S. Keene, currently the corporation's chief operating officer, to succeed him. Mr. Moraco has also resigned from the Board of Directors of the Company, effective on the Effective Date.

On March 20, 2019, Matthew M. Klein, Senior Vice President and Chief Financial Officer of the company, notified Vectrus, Inc. of his resignation, effective April 15, 2019, to pursue other career interests. On March 20, 2019, the Board of Directors of the company appointed William B. Noon, the company’s Corporate Vice President and Chief Accounting Officer, as the company’s acting Chief Financial Officer, effective April 15, 2019.

Albany International Corp. announced that its board of directors has appointed Stephen M. Nolan as Chief Financial Officer and Treasurer to succeed John Cozzolino, effective April 1, 2019. Mr. Nolan has over 16 years of experience in operational and strategic finance, most recently serving as CFO for Esterline, where he co-led the recently completed sale of Esterline to TransDigm Group Incorporated.

At ZRG, we believe that understanding talent trends and anticipating what comes next requires an understanding of both individual company situations and the broader industry context. In this section, we present industry measures that help depict the “big picture” framing talent management and acquisition decisions across the Aerospace & Defense landscape.

The Aerospace & Defense Industry has continued its expansion in 2019. After difficult years in 2015 and 2016, it was perhaps no surprise the industry bounced back on a year-over-year basis as the global economy continued its expansion. 2018 was a slower go, but 2019 has seen a re-acceleration with revenue growth at 4.8% year-to-date.

While industry revenue declined in 2015 & 2016, profit margins remained healthy. Increased revenue growth in 2017 was accompanied by declining margins as investment reaccelerated, but EBITDA margins have normalized in 2018 and 2019 YTD as growth has remained steady.

Further, the divergence has continued into 2019. Despite concerns about U.S. DoD budget cuts and a bull market that is growing long in the tooth, large-cap stocks have bounced back from their December 2018 low and now trade above their 200 day moving average. This same environment seemingly has led to a more muted enthusiasm for small-cap players which sold off throughout the second half of 2018 and still trade below their 200 day moving average.