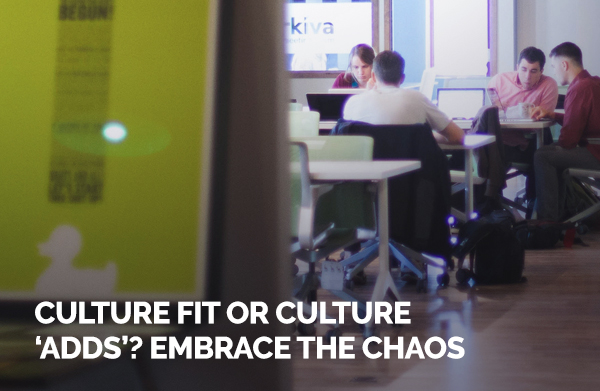 How many times have we been advised to find the “right cultural fit” when involved in a hiring process, regardless of industry? Historically this is usually the place a hiring manager begins when embarking upon a hiring process. Often organizations default to evaluating talent in terms of similarities in background, experience, interests, etc. However, research shows that this can lead to biases and doesn't get to a “cultural fit.” Homogeneity can no longer be the goal in the rapidly evolving economy and changing workplace.

Some years ago, one of the authors of this article was part of a leadership team at a global advertising agency. The team engaged the services of an executive coach to evaluate the effectiveness of this group and help guide them through a rapidly changing media/marketing landscape. The effort began with each member completing the Myers-Briggs Personality Assessment. The results were staggering because of the almost identical “scores” of each of the eight members. Except for “introvert/extrovert,” where there were some differences, all other scales were the same for each. For some, and certainly, several decades ago, this would seem to be a positive. Since the team was so similar it must be compatible and cohesive. Conflict was at a minimum. But is this really good? The coach and this author discussed this at length and, contrary to what most of the other team members perceived, concluded that this was one of the factors that were holding this team back from change, innovation and creativity — not an effective reality for most organizations, especially an advertising agency. What this team needed was a diversity of thought and approach to problem-solving. The team was too culturally compatible; there wasn’t enough “controlled chaos.”

We recently ran across a thought piece by Kathryn Tarantino at Genesis Group. Tarantino posits that finding leaders who fit the current culture isn't the end goal. She goes on to argue that “evolving culture requires having leaders in key roles who explicitly don’t fit the current culture, but more closely align with the culture the organization is trying to foster.”  Organizations, especially those undergoing change and transformation, need a diversity of styles or “culture adds” who will lead the “disruption” with a plan and a purpose. This isn't always a comfortable situation, particularly for long-tenured managers or leaders comfortable doing things a certain way at a certain time. Using this perspective, homogeneity leads to stagnation, and stagnation is the death of organizations in the current hyper evolving economy and workplace.

In the May/June 2019 issue of the Harvard Business Review, there's an article worth noting, “Your Workforce is More Adaptable Than You Think.” The article is based on a study by the authors, who surveyed thousands of employees around the world. When they questioned managers about whether they believed their general employee populations were positioned for a rapidly evolving economy, most answered with a variety of reasons why they were not. “Many managers have little faith in their employees' ability to survive the twists and turns of a rapidly evolving economy.” The findings, however, of this study were fascinating.

Related story: Making Hiring Decisions Should Not Be This Hard, Part 2

“Predictably, business leaders feel anxious as they struggle to marshal and mobilize the workforce of tomorrow. In a climate of perpetual disruption, how can they find and hire employees who have the skills their companies need? And what should they do with people whose skills have become obsolete?

The workers, however, didn’t share that sense of anxiety. Instead, they focused more on the opportunities and benefits that the future holds for them, and they revealed themselves to be much more eager to embrace change and learn new skills than their employers gave them credit for.” (HBR, May/June 2019)

This study goes on to point out that most executives tend to think that the forces driving changes in how work gets done primarily arise out of what can be termed “disruptive technologies.” These authors, however, argue that this is too narrow a perspective or focus. They identified 17 forces of disruption which they grouped into six categories: Accelerating Technological Change, Growing Demand for Skills, Changing Employee Expectations, Shifting Labor Demographics, Transitioning Work Models, and Evolving Business Environment.

The surveys explored the attitudes of both leaders and workers, and offered three differences in how each group thinks about the future of work:

The conclusions of this study are significant for all managers and leaders, regardless of industry or sector. Managers must swiftly identify and respond to shifts in ways of working or new methodologies and techniques. If they don't, their companies will be left behind.

“If you give people the opportunity to learn something new or to show their craft, they'll give you their best work. The magic is in providing the opportunity.” (HBR, May/June 2019)

So, what does this mean for today’s leaders? For one, hiring for “culture fit” doesn’t necessarily apply in today’s world because organizations are under constant pressure to “be current” and willingly evolve. In order to remain relevant, cultures must remain malleable. This isn't to say that the fundamental values of an organization aren't important. They are. But to stay relevant in today’s constantly evolving environment, companies must be diligent in embracing change and preparing their employees for the need to accept change and operate differently.

We've discussed the changing demographics of the workplace in previous articles, with some emphasis on millennials. Thirty-somethings and those behind them who are now entering the workforce have shorter attention spans and are more adept at adapting to and utilizing technology. They embrace change, even welcome it (how many millennials rely on Facebook these days?). Managers and leaders, particularly those from the baby boomer and Gen X eras, must be flexible and embrace environments that are in constant flux.

The May 11-12, 2019 edition of The Wall Street Journal had an amusing article by Jason Gay, who regularly writes for The Journal, usually commentating on the happenings in the sports world. This article was a message to the “Class of 2019.” Gay wrote about chaos and what recent grads should expect as they enter the workforce. It's a fun piece, but has some very interesting determinants that one must be aware of and navigate:

“A little chaos is OK. A little chaos keeps life interesting, keeps you on your toes. Not long ago, a minister in California named Lydia Sohn interviewed a bunch of people between the ages of 90 and 96. There’s a belief that human happiness happens on a curve. People are said to be happiest when they’re young, and don’t have a care in the world — and then happiest again when they're older, retired and liberated to enjoy the little things.

But these 90-somethings that Reverend Sohn talked to — this wasn’t a scientific study, but I think what she learned is interesting — told her something different. They said they were the happiest in the middle part when their lives were messiest when their kids were in the house and tracking mud through the living room and setting small fires in the backyard.

Therefore, managers and leaders heed this rather obvious (but often ignored) advice: chaos is necessary; it keeps life interesting and is more likely to lead to creativity than an environment ruled by the status quo. Don’t underestimate your workers. They're far more adaptive and comfortable with change than many of you give them credit for.

Now go out and look for those “culture adds.” Don’t be caught up in “what was,” but rather focus on what “can be.” Don’t be afraid of change and potential mistakes and not being sure. Go for it!